In a charity shop, my 3 year-old picked up an X-wing toy. It was so broken the R2D2 had to be sellotaped in. It was available for £1.50. I was tempted.

"That's from a film Daddy used to like. Star Wars."

"Star Wars," said my son, solemnly, pausing for a couple of seconds before adding: "The Clone Wars." He'd mimicked the exact style and timing of the trailer. We'd obviously been using the TV as a babysitter too much.

So we sat down later, and I got out the whole damn lot, picking what I call Star Wars, but what George Lucas would call Episode 4: A New Hope.

"No," I said. "But it is the first one." Somewhere, in my head a bell chimed out of tune; not so much a lie, but not the full story. George wouldn't have called it the first one.

Apart from the boy's comment "I like the little robot next to the gold robot" (answers on a postcode), the first half was dominated by the repeated question: "Is this the first one?"

After any sustained interrogation, you eventually buckle.

"Well, it sort of became the fourth."

That was it. The confusion on his face. And I'm worried that it's irreparable. It's the first, but it became the fourth?

Why indeed? He's only just learned to count and now this? George bloody Lucas has a lot to answer for.

"Which number is Clone Wars?"

Good question. You do the math.

I'm sort of making it 2.5; it's somewhere between Episode 2 (the fifth one that came out) and Episode 3 (the sixth one.) For the sake of his maths, I shouldnít be honest, butÖ..

"It's somewhere between 2 and 3," I explain. I think that bell I heard earlier was the death knell for the boy's future career as a mathematician.

He is looking confused.

I haven't gone through decimals with my son yet; as far as his innocent mind goes, there's nothing to separate 2 from 3. Games of hide and seek were never going to be the same again.

"Let's just call it the seventh one" I say, realising I'm digging myself into a mathematical hole.

Boy thinks about this for a minute, looks back at the TV, watches Chewbacca standing at the bar in the Tattooine canteen and says: "Is that man a bear?"

Read another early column, 'Scale: Bigger than a virus, smaller than an Airbus 380' by clicking here. 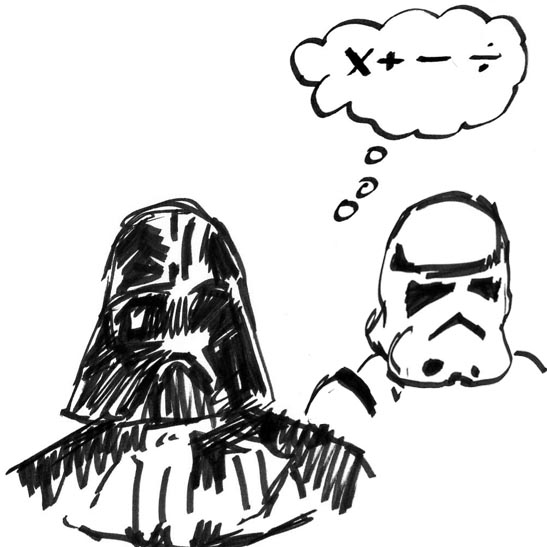