Bigger than a virus, smaller than an Airbus 380

My 4 year-old son is obsessed with scale. His first question when he wakes up is along the lines of: "Is the millennium falcon bigger than the Airbus 380?" (I've previously mentioned in this column he likes Star Wars. He also likes planes.) There are plenty more questions to ask about scale. How big does an ant think our Ford Focus is? "Gigantic," I say. "Huge" he agrees.

As isolated questions , these are interesting puzzles - when they last a morning, and every morning, they become a test of endurance. Both my wife and I spend a lot of time making noises of agreement, or saying things like: "The second one?" Sometimes we'll get something wrong and he'll have the heartbreaking realisation that adults are'ít always listening. "Dad!" he says in exasperation. "A Lear Jet is NOT bigger than the Earth!"

He's got a point. I've read his books on planes. Many times. But if he knows the answer, why is he asking me?

I used to love scale myself. I was fascinated by the Eiffel Tower as a child, and remembered the awe when I saw the blue whale at the Natural History Museum. (A side fact: I learnt recently that when they were creating the blue whale model, the building was No-Smoking. So the creators used to go inside the whale for a crafty fag. That makes it the world's largest ashtray.)

Anyway, is fascination regarding scale in-built? He too, likes the blue whale , even making us forward Finding Nemo to the scene where it appears. (Scene 19, if you're interested.) I'm not sure what the evolutionary advantage of a human's love for blue whales is - surely it's a non-starter in the long-term? - but whatever the gene is, we've both got it.

Like most of his friends, he is fascinated by dinosaurs but then ponders a world in which 'a dinosaur is the size of an ant. What do you think of that, Dad?' It seems to extinguish the dinosaurs' whole raison d'etre, that's what I think, but I don't say that. Instead I agree it would be 'brilliant.' He likes scale at the other end, too. There's an advert involving bacteria, which stops him in his tracks whenever it comes on TV. It's for mouthwash or yoghurt, I think, but he enjoys it like it's a cartoon. So, extremely small and extremely large things fascinate him. It's probably his way of locating himself in the world. He's trying to getting everything into perspective. He knows that he's bigger than a germ and smaller than an Airbus 380. I'm not sure that's accurate enough measurement to go on a form, but it's a start. 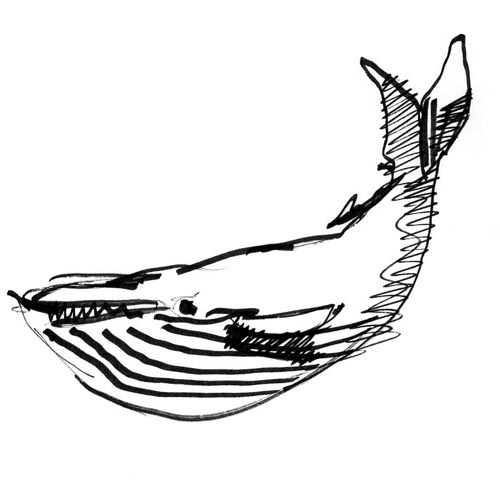